The Coteaux de l’Aubance has long been overshadowed by the Coteaux du Layon, its more famous neighbour situated just a short hop, skip and jump to the west. The most obvious explanation for this lower profile is that it is a much smaller region; even today, having now grown to 160 hectares, it is still only one-tenth the size of the Coteaux du Layon appellation. The volume of wine produced each year is correspondingly small, and thus the region held little appeal to local négociants, or buyers from Paris, who all flocked to the Layon. The vignerons who worked the vines planted along the Aubance sold their bottles locally, in the bars, bistros and restaurants of nearby towns such as Mûrs-Erigné and Saint-Melaine-sur-Aubance.

Another distinction between these two regions can be found in their history. The development of the Coteaux du Layon was to a large extent down to the interest and efforts of the Dutch traders, who provided a ready market for the wines throughout the 16th, 17th and early-18th centuries. During this time many of the slopes along the Aubance went unplanted. While viticulture in this corner of Anjou can be traced back to at least the 16th century, it was only after phylloxera that planting really took off, instigated by an influx of vignerons from the Layon looking for fresh land. Indeed, the very first written reference to the Coteaux de l’Aubance dates only to 1922, lagging behind the Coteaux du Layon by four centuries. 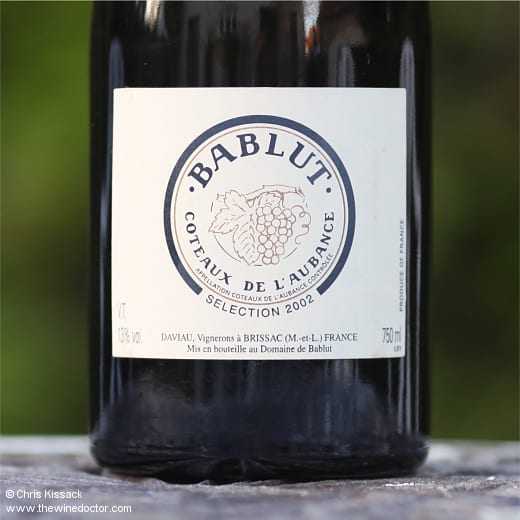 Another reason why the wines of the Coteaux de l’Aubance tend to be overshadowed is perhaps that too many of us focus on what they aren’t, rather than what they are. Compared to the wines of the Coteaux du Layon, it is too easy to point out that the Aubance wines tend to have lower levels of sweetness, or less texture, or less botrytis-driven concentration. But it is the first of these complaints that would probably be most common; the Coteaux de l’Aubance is another victim of those who judge and rank the wines of the Loire Valley purely by their level of residual sugar; the sweeter they are, the higher the score. It is the same with Bonnezeaux.

And yet, as Claude Papin once taught me, the stand-off between typicity and botrytis is a battle often won by the latter. Botrytis and concentration are wonderful, but the more you have (especially when you get up to liquoreux levels) the less typique the wines tend to be. A little less botrytis can allow minerality and regional typicity to shine through, giving the wines a more certain sense of place. This is one reason why I would urge anybody interested in the wines of the Loire Valley to check out the Coteaux de l’Aubance. While levels of botrytis and residual sugar can be lower, the classically Ligérian mineral and herbal style is allowed to shine through. The number of truly reliable domaines is quite small (out of about forty domaines in total) but one among their number is Domaine de Bablut. This weekend’s wine is a very typical example of the Aubance style.

The 2002 Coteaux de l’Aubance Sélection from Domaine de Bablut displays a shimmering golden hue in the glass, showing a concentration of colour which suggests, quite appropriately for the appellation and this cuvée’s position in the portfolio, a delicate presence of botrytis. This is followed by a rather powdery freshness on the nose, the wine fragrant with notes of orange zest, crushed chalk, honeysuckle and orange blossom. Aromatically the focus here is on its cool mineral veins, backed up by a thin threads of botrytis complexity, the latter a supporting rather than lead role. The palate follows the cool and restrained example set on the nose, combining bitter botrytis elements here with grained notes of honey and beeswax, the concentration of dried apricot and orange, with plenty of classically tense, tart and minerally elements coming through which tie the wine to the Loire with certainty. Overall this is a wine of great charm, very Ligérian in style, with a long, smoky and subtle finish. Well done Christophe Daviau. 93/100 (25/5/20)