I remember the summer of 2012 with a sense of fondness. I rented a gite in the Dordogne, on the very outskirts of the Bordeaux region, for an idyllic three weeks. The nights were warm and long, the skies dark and clear, and I would sit outside stargazing, glass in hand. One night I was rewarded with the sight of the most spectacular shooting star, a mini-fireball which streaked across the night sky, before it broke up into several smaller fragments which then burnt out in quick succession. I had never seen anything like it before, and never have since.

It was a retreat which at times felt worthy of the Bacchanalia. Despite being in a very rural location, the gite was situated next door to a homely restaurant which served a seven-course set menu. With each course the table groaned under the weight of the freshly arrived platters of foie gras, salade de gesiers, magret de canard, confit de canard and just about every other canard you can imagine. As if this was not enough, the restaurant’s USP (and perhaps one reason it was so popular) was that instead of pouring a glass with each course they simply left the bottle (a different bottle for every course!) on the table, and you helped yourself. It was a challenge with which I engaged enthusiastically (perhaps too enthusiastically), but at which I consistently failed; I don’t think I ever discovered what the final course (or final bottle) was, as I regularly fell at the fifth or sixth hurdle. 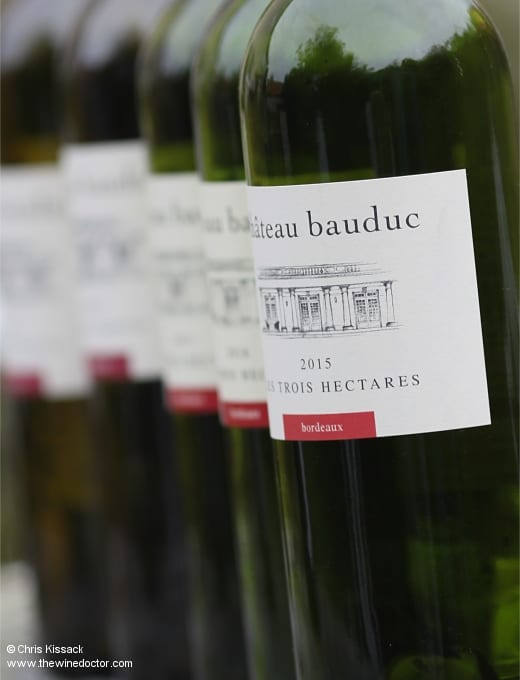 And then there were the visits of course. On alternate days I would strike out west towards Bordeaux. I visited some famous names, as well as some which were new to me. A walk around the vineyard of Château Lafleur, with Jacques Guinaudeau, was a highlight. And so was my visit to Château Bauduc, where proprietor Gavin Quinney treated me to the second largest platter of charcuterie I had ever seen (obviously my local restaurant took first place), along with a comprehensive tasting of recent and older vintages. It was a moment to dream……maybe I should sell up and buy a château in Bordeaux, and plant my own vineyard….?