This week an example of Grolleau, a name no doubt of great interest to people who like to maintain a wine grape ‘life-list’, so they can tick off another variety, somewhere between Agiorgitiko and Zweigelt. Unless you look to the Loire Valley, and particularly to Loire Valley rosé, this is one variety you are unlikely to discover.

Grolleau (the name is derived from grolle, meaning crow, apparently a reference to the grape’s black colour) has a number of synonyms, not least Groslot; this latter name perhaps says something of its tendency to high yields, anywhere between 80 and 120 hl/ha unless the vines are pruned hard. The planting of the variety was once rather more widespread than it was today, having fallen from 11400 hectares in 1958 to about 2200 hectares when assessed in 2004. It has largely been usurped by other typical Loire varieties, notably Gamay and Cabernet Franc. The reason for this shift is the character of Grolleau itself; its wines have always tended to be rather lean, acidic and light in colour, and so today although it is a legal component of the blend in many Loire rosés, from Saumur and Anjou, it is excluded from the make-up of the corresponding red wines.

I suppose it is only right that planted varieties are tailored to the eventual wine, otherwise we might end up with Syrah planted on the Côte d’Or and Riesling planted on the Côte-Rôtie, but let us not go too far, as in the entry for Grolleau in The Oxford Companion to Wine (Oxford University Press, second edition, 1999), edited by Jancis Robinson, which states that “…it is to the benefit of wine drinkers that it is so systematically being replaced…“. Really? The systematic eradication of a particular variety of Vitis vinifera is to our benefit? Yes, I suppose so, in the same way that the homogenisation of food and drink worldwide, turning every restaurant into a fast-food burger outlet, every soft drink into a factory-produced can of cola, is also to our benefit. What a travesty it would be if Grolleau were to disappear forever, not only because this is part of France’s vinous heritage, but also because the variety can – in the right hands – make delicious wine, as evinced by this week’s pick from Mark Angeli of La Ferme de la Sansonnière. 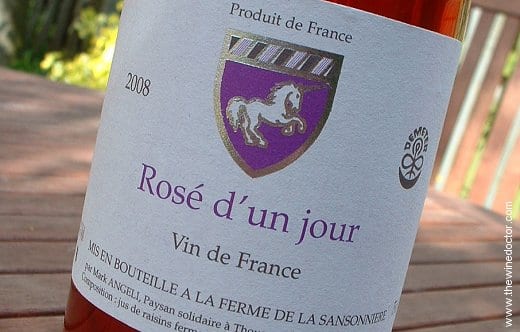 The 2008 Rosé d’un Jour is a remarkable wine; like many of Angeli’s wines it has been refused the agrément (or perhaps he hasn’t even bothered applying), and so rather than being AC Rosé d’Anjou this is bottled as Vin de France (a category to replace vin de table which permits the mention of vintage and grape variety on the label). It has a delicious colour, a deep salmon pink, concentrated in hue but very much in the dark salmon-sunset part of the spectrum rather than a more vibrant pink. In the bottle there is also a huge presence of sediment, sheets of dark purple crystals as big as my thumbnail floating about, and the wine is also a little pétillant, the bubbles fizzing up as the bottle is opened, and also in the glass and on the palate. On the nose there is liquorice, nettle, creamed strawberry and redcurrant, all wrapped up in a light, lifted freshness. There’s a bit of sediment coming through in the glass (perhaps I should have decanted this, not usually necessary for a young rosé!), but otherwise in the mouth this is a delight. At just 11% and slightly pétillant – a carbon dioxide hangover from the fermentation which I suspect will disappear from future bottles – this is very refreshing, and delicious acidity helps in this respect also. There is a little sugar, but only as suggested by the fleshiness of the palate alongside the sparkling structure of the wine – there is no overt sweetness. There’s no firmness to this wine, no great definition, but it all hangs together beautifully just the same; lingering on the palate as it does, with its minerally, nettly, redcurrant leaf character. An absolute delight to drink, this is a testament both to Angeli’s skill as a winemaker, and to why Grolleau must be saved! 17.5/20 (18/5/09)