Following a fabulous tasting of the wines of Richard Leroy, a full report on which I will publish tomorrow, it seems inevitable to me that my chosen ‘weekend wine’ this week should be one of Richard’s. One of the most iconic names in Anjou winemaking, Richard Leroy makes exceptional Chenin Blanc from two distinct plots of vines – the Clos des Rouliers and Les Noëls de Montbenault – near his home in Rablay-sur-Layon. Looking down the roll call of the eleven wines in the tasting at least half of them had me in raptures, and I could have chosen any one of them as a favourite on which to throw the spotlight here. But I think the 2009 Les Noëls de Montbenault has it for me. I often prefer the wines of this vineyard, which sits on the very gentle slopes between the village of Montbenault and the Layon in the commune of Faye d’Anjou, to those from the Clos des Rouliers. And of all the recent vintages, the 2009 is one of the most convincing.

I was reminded of my confidence in the wine just last week when I received an invitation to submit three wines for the annual (well, this is its second year, so it’s ‘annual’ now) Absolutely Cracking Wines from France tasting. In case you’re unfamiliar with the event, the tasting features wines available at retail in the UK, and all chosen by the UK wine press for inclusion. Each invited individual submits three wines, in three price categories; last year I suggested two Muscadets (from Chéreau-Carré and Domaine de la Pépière if you’re interested) for the two lower-price categories, but for the £15-30 price category I proposed – you guessed it – the 2009 Les Noëls de Montbenault from Richard Leroy. The idea was to suggest a wine suitable for Christmas celebrations (the tasting was held in September) and as requested I added a little description of the wine, stating that it was an alternative to white Burgundy for the Xmas table, noting that it was “individual, honest and stunning” (which it is). 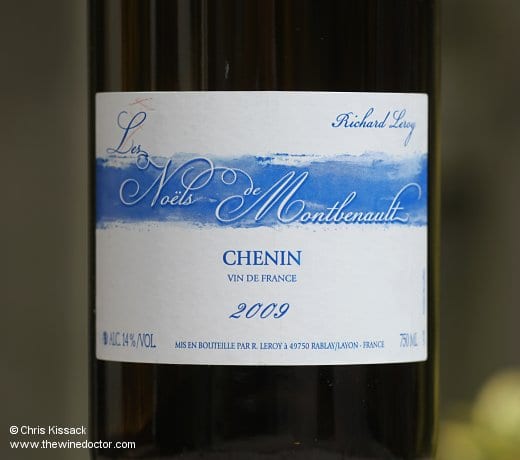 Coming back to the wine this weekend, tasted alongside other wines from Richard from the 2004, 2005, 2006, 2007 and 2008 vintages, I was once again struck by its delightful, confident, composed presence. This is very serious Chenin Blanc; I know some feel that Chenin Blanc and oak (Richard favours oak barrels, some new, for fermentation and élevage) are simply not great bedfellows, but for me Leroy’s wines show such rules to be false. Despite my admiration for the wine, the only other published review I read after the Absolutely Cracking tasting came from Jancis Robinson who described it as “Very tense – almost stomach clenching.” I’m not being selective here; that is the entire tasting note, and it does not suggest to me the wine found favour (unless stomach-clenching is a good thing?). Oh dear.

Having revisited so many of Richard’s wines this weekend, I feel they display harmonious energy, concentration and substance. This is especially so in 2009, which was one of the warmer and more benevolent vintages for the Loire Valley in recent years. Against a context of tasting nearly every wine Richard Leroy has ever made over the past ten years (although I confess I have yet to taste the 2010s, because I missed hooking up with Richard at the 2012 Renaissance tasting in Angers), I find the 2009 Les Noëls de Montbenault to have great balance and vigour, and it is perhaps my favourite Leroy cuvée and vintage of all. That is, you probably won’t be surprised to hear, why I chose it for the Absolutely Cracking tasting. And that’s why, out of all the wines I could have chosen, from half a dozen different vintages, I’m featuring it here, today.

In the glass, the 2009 Les Noëls de Montbenault shows a pale lemon-gold hue, one that does not suggest the oak this wine has seen will have had any untoward effect. The nose, in keeping with this thought, is pure, rich and very expressive, with a very fresh and confident character. The fruit is dominated first of all by scents of sweet apple, a lightly perfumed variety perhaps, with the suggestion of a dense and pithy concentration to it. This seems to gel as the wine opens up, showing more citrus pith nuances, along with more exotic notes redolent of sweet melon, with a fresh, crystalline edge. In the mouth it is no less appealing; it has good polish and depth here, showing energy, form and a confident grip running right into the finish. The acidity feels correct, and there is a lot of concentrated Chenin character, great backbone and substance to it, and overall it seems totally spot on. A superb wine, my favourite from Richard in recent vintages, and like all great examples of Loire Valley Chenin Blanc it is one that needs time in the cellar to show its best I think. 18.5/20 (24/6/13)