Back to the Loire this week with this wine which originates from a most unusual and distinctive vineyard. More on that in a moment, but first a little more on its founder, Antoine Cristal.

Cristal was not born to viticulture, and yet he plays an important role in the history of Saumur and its wines. Originally the son of a wagon maker from the Auvergne region, Cristal worked in both Tours and Angers as a textiles salesman, eventually accruing sufficient wealth for him to purchase the Château de Parnay near Saumur. There he turned his attention to viticulture and winemaking, and within a few decades his wines were on the lists of the greatest French restaurants, and were being exported further afield, including to the English court. On the whole, though, these were white wines, red vines being almost unknown within the commune. Today red dominates, although there are some who might wish for the pendulum to swing back a little, as it is increasingly realised how favourable some of the Saumur terroirs are for white varieties. This conversion to a predominantly red wine commune began with Père Cristal, as he came to be known, who was first to vinify the wine that was the forerunner of today’s Saumur-Champigny. 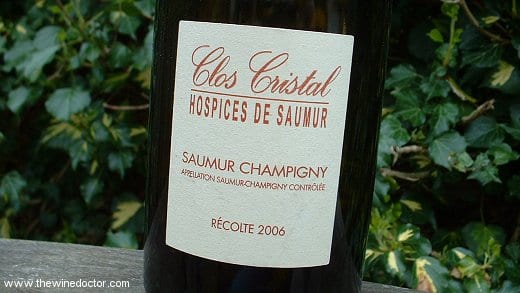 Unmarried and reputably with the charm and manners of Alf Garnett, Cristal died alone in January 1931. A little more than two years before he had donated his prime vineyard, Clos Cristal, to the Hospices de Saumur. A remarkable and indeed unique site, the vineyard is characterised by three kilometres of walls running east-west through the vineyard. On the north side are planted the vines, which grow up the walls a variable distance before being trained through holes to the south side. On this side, facing the sun, the vines erupt into foliage, benefiting not only from excellent exposure but also from the warmth of the wall, which absorbs the energy of the suns rays during the day, slowly releasing its heat during the evening and night. It is a remarkable concept.

Today the vineyard is managed by Celine Dubois, but it remains in the possession of the local hospital in Saumur, no longer a workhouse-like hospices but a very modern facility positioned on the hill above Saumur, nestled in amongst the suburbs behind the town’s famous hilltop château. Sales of the wine continue to contribute to the hospital’s upkeep, so Clos Cristal’s Saumur-Champigny is one bottle that we can open with a clear conscience! In my case the bottle in question is the 2006, a wine with a very dark hue in the glass, deeply coloured at the core, vibrant red at the edges. The nose has a very dark fruit character, full of dark cherry tinged with coffee, and yet alongside this there are also vegetal notes, herbs and Provençal vegetables. The palate is a middleweight, although it shows more substance in the midpalate, and there is always plenty of very firm structure underneath giving the wine definition. The palate has a firm, cherry skin fruit, with dry tannins and a puckering, attractively sour finish. There’s just a little bit of length to it as well. Overall, a good wine. 16+/20 (3/5/09)