While few in their right minds would turn down a freely offered glass of Petrus or Château Haut-Brion, the reality of drinking Bordeaux for the majority of us is that life never features such dreamy opportunities. This is something the upper echelons of the wine writing world seems, from time to time, too ready to forget. There is nothing wrong with waxing lyrically about the ancient and rarified vintages recently imbibed, and even I (not that I would dare to place myself in the ‘upper echelons’ of anything) have been occasionally guilty of this crime, as evidenced by last year’s All the Nines report featuring wines from as long ago as 1929. I just think it is too easy to forget the reality most wine drinkers face; grand invitations and freely poured old vintages are not the norm.

As my Weekend Wine report almost always features wines I have bought myself, it isn’t too difficult to remain grounded regarding Bordeaux and its prices. One of the delights of visiting the region is discovering great wines which remain identifiably Bordelais in style but which remain good value, in contrast to Bordeaux’s over-arching image as expensive (which is largely based on the top two-hundred-or-so châteaux in a region with ten thousand such properties, so hardly a representative view). Recent bottles that fit the bill include the 2015 Château Reynon, 2000 Château Fonbel, 2008 Château La Clotte and the 1989 Château Tertre-Roteboeuf. Yes, my tongue is firmly in my cheek with the last one, but the first three all ticked the ‘good value’ box. 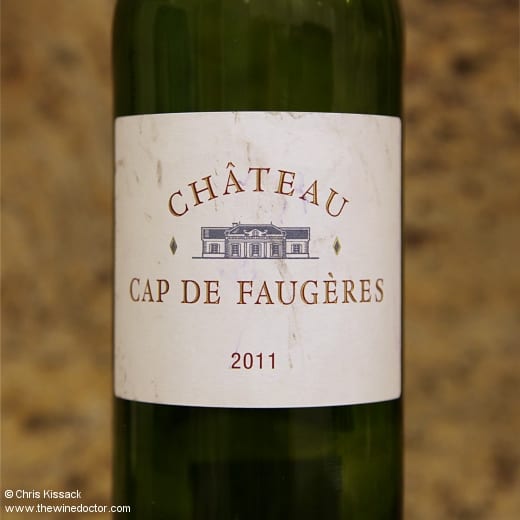 This weekend’s wine is another right-banker with the power to please without breaking the bank. Unlike the wines mentioned above, however, this one absolutely typifies the modern style that has run through certain right-bank appellations like a virus in recent decades. Richly endowed, laden with spicy oak and extracted tannin, it is a style I have struggled with over the years, sometimes beaten into submission by the winemaking and the wood, sometimes enchanted by a wine’s body and sheer bravado. In recent years I have warmed to (or at least learned to tolerate) the modern style, ironically just as many in the region shift uneasily away from it, perhaps eager to embrace fresher and more fragrant styles in an era when climate change means such over-done wines are no longer seen as an achievement of note. Or perhaps they are just following the more tender palates of the preeminent (‘upper echelon’) critics of the day.

Thus I come this week to the 2011 Château Cap de Faugères, from an appellation which today goes by the name of Castillon Côtes de Bordeaux. Even as it approaches its ninth birthday this wine displays an undeniably modern style, opening with a dark hue in the glass, completely opaque at its core, with just a faint fade of the pigment out at the rim, giving it a rather matt and dusty hue here. The nose just takes half an hour or so to open up, and as it does so it reveals scents of sweetly roasted blackcurrants and blackberries, along with more complex suggestions of black olive, rosemary and black pepper. The palate follows the lead of the nose, being laden with dark and spicy fruits, especially blackberry and black olive, all wrapped up with some sooty and extracted tannin which provides the wine with a firm grip through the middle of the palate and into the finish. Despite this it feels surprisingly lively, wearing its peppery structure with panache, although it is certainly a wine that majors on texture and breadth rather than precision or frame. Nevertheless, this drinks well, and I am sure this will continue to develop the cellar for another five or more years. A good showing from this domaine, in what was not an easy vintage. And, what’s more, I could afford to buy it. 91/100 (24/2/20)