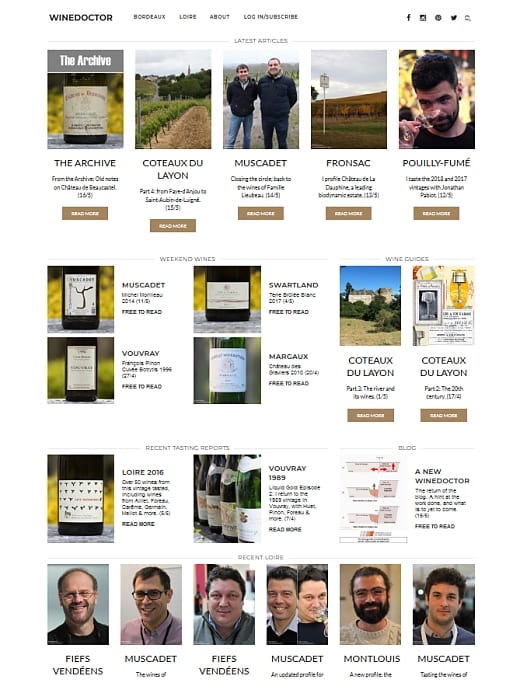 Behind the Scenes, Blog, News

Is it May already? Can somebody explain to me how that happened? Is time dilation/compression another as yet unappreciated symptom of Covid-19, along with anosmia and Covid Toes?

Yes, unbelievably it is May, and that means it is now four months since the new Winedoctor website – a Winedoctor fit for the 2020s! – was launched.

Redesigning this site was long overdue; having started out in May 2000, this is now the fifth iteration of Winedoctor. Iterations one and two are now lost to time – I tried to find a screenshot or image but couldn’t, which is probably a good thing. Iterations three and four (very similar, four being the same as three but with revamped code behind the menu) will be the only ones that I expect anybody will remember. They worked well for a long time, but I knew I needed to modernise. The problem was, I also knew it was a gargantuan undertaking. I didn’t respond well when one influencer told me, and I paraphrase, that it “would take a day and an IT undergraduate would do it for a few bucks”. Some people have more opinion than knowledge.

I started out in September 2019, working purely on the upgrade every weekend for close to four months. That is how long it takes to move a 6000-page website from old-world HTML coding to modern-day WordPress. Folders were reorganised. Pages were clipped and cleaned, often in bulk. Links were broken and repaired, many weekends of work, all in preparation for the import. So the moment when I realised that there were no functioning HTML-import plug-ins for WordPress, as they all pertained to PHP-5, but my new server and my version of WordPress was running on PHP-7, was a memorable one. So I learnt a little PHP coding along the way, fixed the raw code of an outdated HTML-importer plug-in, and away we went.

I didn’t want to use one of the few WordPress themes that many people go for – they make websites look ‘generic’, and are often laden with irrelevant advertising slots, clearly of no relevance to Winedoctor which has been subscription-driven for seven years. So I bought a WordPress theme, my choice made on the basis of the home-page design. It was only when on the home straight that I realised the home-page was populated with data and images from WordPress posts, not WordPress pages. Yes, there’s a difference. This moment was one you might refer to in an interview as “character building”, but I feel it was beneficial in the end as it meant I had to build my home-page (that image above) from scratch, giving Winedoctor a typically unique look. I soft-launched the new site in the dying days of 2019, before emailing my subscribers on New Year’s Day.

Since then I have been focusing on content again, profiles and updates and of course my guide to the Coteaux du Layon, with huge detail on the region’s geology and how it relates to the landscape and the wine. I love writing these guides – along the way I think I learn as much as readers do. But I have also been working behind the scenes, as the launch still left many tasks in hand. Code glitches mainly; unwanted forward slashes appearing in text links (fixed), disappearing apostrophes (fixed), invisible bullet points (fixed) and so on. Work which has largely finished, leaving me free to start developing the site in other ways. I will be adding an archive of old notes from Winedoctor, not comprehensively, but bits and pieces that reflect the evolution of this site; starting today, I have added some old notes on Château de Beaucastel. I have added this blog, for more random and irregular postings (I might even get around to making my 2019 disclosures post, if I can remember that far back – I know it’s always a popular one). And I am looking forward to softening the paywall, something that was impossible in total HTML, but is possible (I believe) with WordPress.

Who knows, I might even be able to return to Bordeaux (like many I had to cancel my trip for the primeurs) and the Loire Valley (I was supposed to depart today, another cancelled trip) sometime soon. Fingers crossed.