In order to provide some contrast with my Bordeaux 2010 reports I have been trying to focus on more individual and esoteric bottles with my Wine of the Week updates during April. Naturally I have focused on the Loire, and having started in the Touraine with Émile Hérédia’s 2008 Verre des Poètes I subsequently moved downstream for the 2007 Anjou Les Monts from Eddy Oosterlinck, before reaching the Nantais last week with Marc Pesnot’s 2009 La Bohème. If I continue travelling west I will run out of vineyards, so this week I move south, across the Pyrenees into Rioja, for this aged reserva from López de Heredia. This wine may perhaps bring us full circle; I read somewhere that Emile Heredia is a distant relative of the Spanish Heredia family, but I confess I do not know for sure whether or not this is true.

In some other respects this is a somewhat peculiar wine to be featuring here, as I have already permitted the 1987 Tondonia Blanco Gran Reserva to appear on these pages. Perhaps I should have had the two side by side to compare, but I decided that rather than commit them to such an analysis, which ran a risk of ending up as some sort of competition, I would savour each bottle individually, looking at the merits of each wine in isolation (or, as wine has always been meant to be appreciated, with a meal). And so it was, in this very open and pleasure-hungry frame of mind, that I came to this 1987 Rioja Reserva. 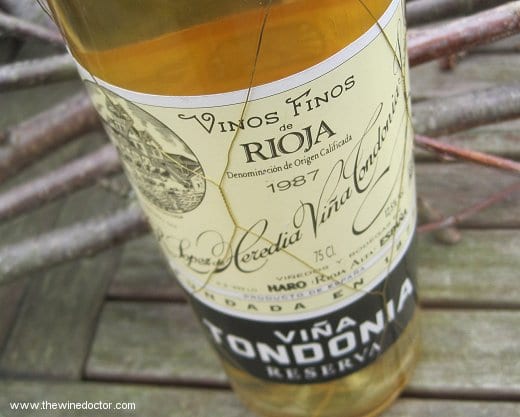 Before getting to the wine, a few words on the vines from which this particular reserva originates. López de Heredia is based in Haro, or to be more precise it lies on the northern outskirts of the town, along with a number of other bodegas some of which I know well – such as La Rioja Alta and Muga, just across the road from Heredia – and some of which, such as Gómez Cruzado – are less familiar, to me at least. These bodegas enjoy a prime location, adjacent to the railway necessary for the transport of their wines, and with a huge sweep of vineyards on their doorstep just to the north. These vineyards lie on a minor isthmus surrounded on three sides by a dramatic sweep of the meandering Ebro, Rioja’s river. There are many individual plots here, criss-crossed by roads and tracks, and 100 hectares of these vines belong to Heredia. Such a large expanse of vineyard was not acquired in one fell swoop though; founder Don Rafael López de Heredia acquired the vineyard in piecemeal fashion, gradually building it up into the estate that we know today. His crowning achievement was to have been an imposing château, half Bordelais and half Moorish in style, to be constructed on the highest point among the vineyards, a site he purchased in 1907. Sadly as war gripped Europe the project faltered, and it was never completed; to this day just the foundations and cellars exist.

As for the wine, the López de Heredia Viña Tondonia Blanco Reserva 1987 has a rich golden hue, really quite comparable to the gran reserva tasted last year – if my memory serves me correctly, of course. The nose betrays the wine’s maturity though, kicking off with a good hit of volatile acids on the nose. Maria López de Heredia doesn’t recommend decanting their wines, so I was tasting this straight from bottle. Thankfully this volatile element blows off pretty soon (perhaps decanting would actually have helped this process), although what is left does seem very tertiary, with notes of mushroom fading out and yielding to more prominent elements suggestive of old school desks, all dried and dusty wood, with more spicy aromas redolent of well hung meat. An Iberian ham, perhaps? And there is a nutty line to it too, which I like. A good substance on the palate, certainly not dried out, showing a full, broad and structured substance, with firm acidity lending the wine a rather spicy backbone. This is certainly a rather challenging wine in the mouth, this assault led by that backbone of acid, with the grip of the midpalate – from the oak, maybe – following on behind. In the finish, its subtle, lanolin-like texture breaks open and the cleansing acidity comes through, carrying the length for simply ages. Whereas this wine seems more aged than the gran reserva (although I think Heredia fans might view it as something of a youngster) and the complexity is less bright, I do still find this an admirably composed wine. 16.5/20 (25/4/11)