Having completed a tour of Pessac-Léognan, an enclave of Graves created in 1987, it is only natural to come next to Sauternes. Sauternes and the associated sweet wine appellations of Barsac and Cérons are also enclaves of the Graves vineyards, each one surrounded on three sides by this much larger appellation, and by the waters of the Garonne on the fourth. Unlike Pessac-Léognan, however, these are not very recent creations, cleaved from Graves in recent memory; in fact, Sauternes, Barsac and Cérons all predate the Graves appellation, even if only by a year. And like Graves, these are also regions steeped in history, with many estates claiming an origin that dates back to or sometimes precedes the Middle Ages.

As there was with my guides to Graves and Pessac-Léognan, there is some overlap between these three sweet wine regions, nevertheless I think it appropriate that we look at each one in turn. I will start here with Sauternes, beginning with its history (which does pertain to Barsac and Sauternes as well, of course) before looking at the appellation of Sauternes itself. Then in the next instalment, I will focus more on Barsac, and what it is that distinguishes this particular commune from the broader appellation of Sauternes. Finally, on the page after that, I will look at long-forgotten Cérons, as well as the lesser sweet-wine appellations.

A Brief History of Sauternes

The region around Sauternes, south of modern-day Bordeaux and close to the Garonne, has been inhabited since ancient times. Long before viticulture arrived, the locals defended their land, and their crops and livestock from marauding bandits just as was necessary in the larger region of Graves. With time larger fortresses were built, thick-walled with corner towers, buildings that were strongholds and castles, not the elegant châteaux that we associate with Bordeaux today. Thoughts immediately turn to Château d’Yquem, a château with a very ‘ancient’ feel to it, but in fact much of what exists at Yquem dates to the 17th century; the fortress at Lamothe – now derelict, although the ruins can still be perceived next to modern-day Château Lamothe and Château Lamothe-Guignard, or that at Château de Fargues (pictured below), are perhaps better examples. 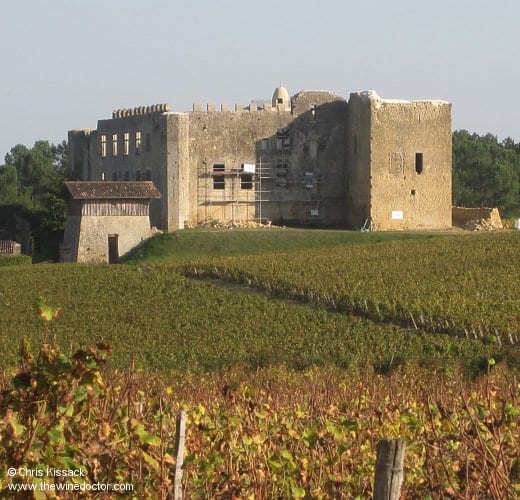 With the passing of time the region became more safe and secure, and those that lived here at the time could turn there thoughts to agriculture and of course viticulture. Who planted the first vines, where and when, is not known, but it is probably safe to assume that viticulture has been ongoing here for at least as it has in Graves. What is perhaps more interesting is to consider when the focus changed from making dry wines, red or white (and many hundreds of years ago it was almost certainly red that dominated), to making sweet white wines. And what is it about these little corners of Bordeaux – Sauternes, Barsac and Cérons – that so predisposes them to the development of Noble Rot, the mouldy infection with the fungus Botrytis cinerea that dehydrates the grapes, increasing the concentration of sugars within.