Even hardened beer drinkers and committed imbibers of whisky, those whose palates are tied to such libations and who never let a drop of fermented grape juice past their lips, have at least heard of Sauternes, if perhaps not Barsac. Indeed, for many years, before such licentious labelling was outlawed, Sauternes was a byword for sweet white wine of any origin. Its fame naturally reflected the magnificent quality of the wines produced around Bommes, Preignac, Sauternes, Barsac and Fargues, but a few decades ago what was in the bottle might well have come from anywhere. Sweet, sickly, sulphurous, more often than not Spanish, the ‘Sauternes’ of old was not just famous, it was infamous.

With Cérons, however, we have the exact opposite. Even committed Bordeaux-o-philes will struggle with this one. Who even knows where Cérons is? Have you been there? Have you ever tasted the wine, or even seen a bottle? The answer to all of these questions is quite possibly ‘no’. This is symbolic of the world’s declining interest in sweet wines, combined with one peculiar distinction between this appellation, and the appellations of Sauternes and Barsac.

The Decline of Sweet Wines

Times and fashions change. There was a time when the sweetest wines to come out of Bordeaux were also the most desirable, and thus the most expensive. This was a time, however, when Russia was ruled by Tsars, Tsars who also happened to be great drinkers and advocates of the wines of Sauternes. During the 20th century tastes turned away from sweet wines to dry, and gradually drinkers came to neglect what were once the region’s most highly sought after wines. As a consequence prices fell to unprecedented levels, and they remain relatively low today. If you consider the huge amount of work required to harvest the fruit, and the much smaller volumes of botrytised fruit (as pictured below) obtained compared to a rot-free red wine harvest, they are also relative bargains. Château d’Yquem is an expensive bottle of wine, but compare the price of this first growth to those achieved by Château Ausone, Le Pin, Château Lafite-Rothschild, Petrus or any other number of first growths or equivalent châteaux and there is a huge and obvious disparity. 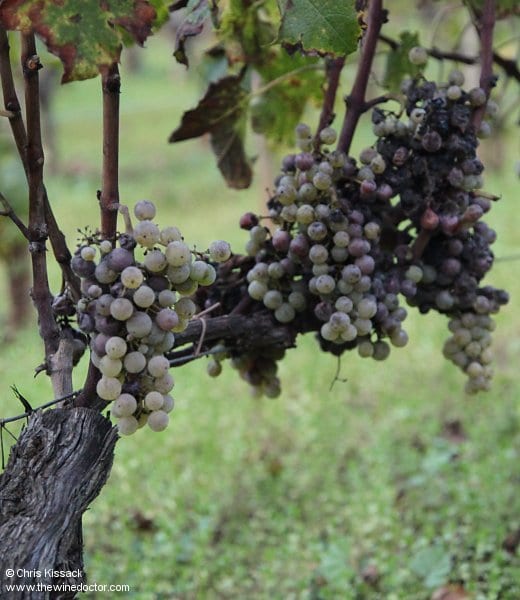 The declining interest during the 20th century inevitably led to a lack of investment in the region. In the context of a market in general decline as a consequence of the wars and depression that dominated the first half of the century, and a shift away from sweeter to drier styles in important export markets, it is no surprise that so many of the estates lay untouched and seemingly unloved for decades. Sauternes and Barsac has seen more than its fair share of dilapidated châteaux and untended vineyards over the years. Happily this situation appears to have reversed a little in recent times, thanks to outside investment and perhaps a slight upturn in interest in these wines, but the fact remains that wines such as Sauternes, Barsac and Cérons remain a tough sell for all involved. It is perhaps not surprising that, although I don’t believe it is helpful in the long run, some proprietors bundle the wines of their Sauternes château with their more popular red wines. The classic example of this is Château Rieussec, owned by the Rothschild family, which merchants have to take in order to obtain their allocation of Château Lafite-Rothschild. The end result, however, is that the merchants need to drop the prices to move these larger volumes (nobody wants to be lumbered with large stocks of hard-to-sell sweet wines), which only reinforces the image of Sauternes as a region in distress.