There are a myriad examples of the inaccuracies and vagaries of the appellation d’origine contrôlée system; supposedly created to protect France’s wine heritage, to maintain distinctions, enhance quality and to protect against fraud, the boundaries between one appellation and the next in many cases are clearly lines drawn to match political or communal boundaries, and in some cases they are clearly straight lines that bear no relevance to terroir, a triumph of convenience over consideration. One appellation where they seem to have it right, however, is Barsac. One of the five communes eligible for the Sauternes appellation, it was long recognised that the wines produced here had their own unique character. So much so that, in the flurry of appellation creation that followed the development of the concept by Baron Le Roy and his peers in the 1920s, Barsac was born, the date of the decree preceding that of the date for the broader Sauternes appellation by 19 days.

There is a clear physical boundary between Barsac and the other communes of Sauternes, this being the Ciron, a little river and yet of great significance, as I have already alluded in the preceding section of this guide to Bordeaux. It has long been said that it is the Ciron which engenders such ideal conditions for the development of Noble Rot in this little corner of Bordeaux. It would be foolish of me to dispute such a claim, not least because I believe it to be largely true, but there are certainly some nuances to this romantic tale.

The course of the Ciron (pictured below, near the crossing between the villages of Jean du Bosc and Lamothe) runs through the forests of Les Landes before emerging to pass along the south and west boundaries of Sauternes and Bommes, before then bisecting the Sauternes appellation as it makes a beeline for the Garonne, with Preignac on its right, Barsac on its left. The waters of the Ciron are icy cold, the result of it having been shielded from the warming rays of sunshine by the tree canopy of the forest for much of its course. The cold waters suddenly emerge from the trees when they reach the vineyards, and warmer air coming into contact with the much colder air over the river rapidly cools, with an associated condensation of water vapour. As a consequence the Ciron is responsible for the mist that hangs over the vineyards of Barsac and Sauternes, encouraging the development of Noble Rot on the grapes, and it is this peculiarity of local geography that explains why these two appellations are the foremost for the production of sweet wine in the region. 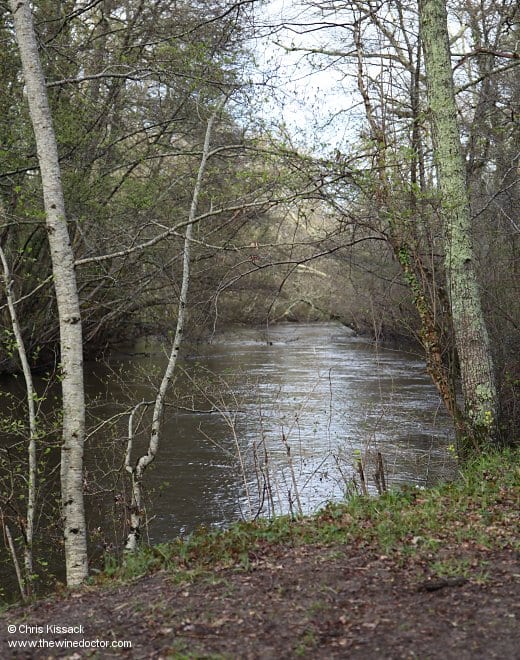 Were such conditions to persist all day, every day, the Botrytis infection would run riot, and would reduce the bunches of grapes to a wet, grey, awful-tasting mass. Happily, come the afternoon, the warmth of the sun takes over, the mist dissipates, and the botrytis rot dries up. In doing so, the mould having by now punctured the skins of the grapes, they dehydrate, and the concentrations of sugars and acids climb, the flavours more complex as a result of this ‘clean’ type of rot. It is this process, the misty rot of the morning and the warm, drying sunshine of the afternoons, that gently coaxes the fruit towards fully dehydrated, sweetly roasted Noble Rot. This is the romance of Sauternes and Barsac, and to a lesser extent Cérons and the other sweet white wine appellations of Bordeaux (although these regions are more distant from the Ciron).